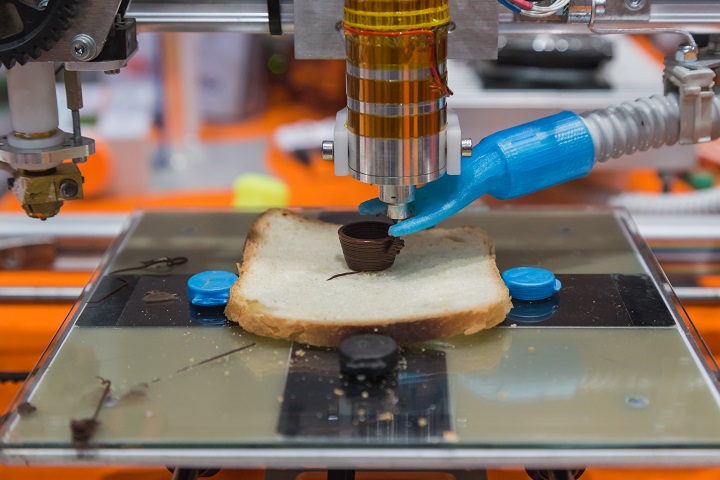 From Robots to Drones: Restaurant Tech of the Future

Mobile apps, tableside payments, online ordering and electronic menus are just a few examples of restaurant technology that has seen widespread adoption in recent years. While such technology has been well received by both restaurant owners and customers, other emerging technology might take a bit more convincing before it becomes mainstream.

From robots to 3D-printed food, the restaurant technology below almost seems like it belongs in a science fiction movie. But, if done correctly, restaurant tech of the future has the potential to make restaurants more efficient while improving the customer experience.

At the 2016 NRA Show, robots were one of the hottest topics in restaurant technology. For example, Suzumo International has discovered a solution to bring sushi to the masses quickly and efficiently. The latest “Sushi Robot” can make up to 4,000 pieces of sushi an hour, or a complete roll of sushi every 12 seconds. This can help all-you-can-eat buffets, as well as sushi restaurants inside sports stadiums, schools, hospitals and more, produce mass volumes of sushi in a small amount of time. Another example from NRA  – intended for fast food restaurants – is a robotic fry cook. Rethink Robotics developed a robot that can cook fries as quickly as a line cook.

As a restaurant owner, there’s no need to worry about adding robots to your technology budget just yet. There are still many kinks to work out, such as high operations costs and a tendency for robots to break down. In the meantime – and even if you do add some robotic technology down the line – continue training your human staff to offer the best customer experience possible.

It’s a bird, it’s a plane, it’s a drone waiter? Companies such as Amazon have experimented with using drones to deliver packages and restaurants have started to follow suit. In Singapore, Infinium Robotics’ drones can carry just over four pounds of food and drinks to customers. A sophisticated computer program and infrared drones placed around the restaurant guide the drones to designated diners.

When it comes to local delivery – outside your restaurant’s doors, for example – drones have a ways to go before they become reality. While it isn’t too difficult for drones to deliver to standalone properties, engineers have yet to figure out how drones can make their way to the correct condo or apartment in a high rise building. So for the time being, keep growing your revenue, focus on hiring and training delivery drivers  – or consider outsourcing to a restaurant delivery service.

Fresh from the 3D printer

For a restaurant to see long-term success and customer loyalty, consistency is key. To create delicious and visually impressive dishes everytime, restaurants and food manufacturers have started to test out 3D printing. Instead of following a traditional recipe book, food blueprints are housed on a USB stick or SD card. Once chefs are ready to create their masterpiece, the blueprint is loaded for printing. One restaurant pioneering the 3D-printed food movement is Food Ink, which bills itself as the world’s first 3D-printed restaurant, and is making a worldwide tour  – complete with both 3D-printed food and tables. For the menu, gourmet chefs from around the world will be working from their own menus.

3D printing for restaurants is still in the early adopter phase. If you’re interested in adding 3D-printed food to your menu, consider experimenting with only one or two dishes at first, while your expert back-of-house staff continues to cook the dishes your customers know and love.